As he travels around the country, Eiichiro Taruki sings in over 300 stages a year. Unable to do either activity, I wonder what his mind is up to now. Although I was half worried, another part of me was confident that he had found a way to navigate through this tough time. Hoping to update each other about our lives, I caught up with and interviewed him.

Perhaps I’m a little relieved. This is a chance to reflect, and the same can be said for the receiving end too.

– Tell me about your living situation in Hiroshima Prefecture’s Fukuyama during this time (April 20th, 2020 at the time of recording).

Hiroshima is a bit behind Tokyo, but is becoming more aware of things. In Fukuyama, there are only a little over 10 cases (upon researching, I found out that there were actually 21 cases at the time), so it’s up to the families to decide if they want to keep sending their kids to kindergarten. I’ll keep sending mine to kindergarten for now, we’ll see. My kid isn’t happy about it though. Big businesses are closed, but for one person I know, although with some restrictions, his business is still operating.

Every few years, there is this rush in my body which makes me feel like I just want to go anywhere and perform. Last year, I did a total of 329 live performances (including some performances done on the same day). Well, I’ve been jobless the past 2 weeks. Everyday I’m getting contacted about plans being cancelled, but surprisingly, I’ve been really calm about it. Looking back, it was the same when the earthquake and the Hiroshima landslide happened. I think I was mentally prepared. When there were reports of the coronavirus in the earlier stages, I had a gut feeling. Since part of my job is to be present at the actual scene to perform, I knew that I would be one of the first to fall victim to this situation. That’s why before the state of emergency was announced in Tokyo, I relocated my base to Hiroshima earlier than initially planned. I had my family return to Hiroshima ahead of me, while I tried to perform as much as possible in each area.

In the San-in region such as Shimane, there were no cases at the time so it was quite laid back, and the audience was pretty big. The atmosphere in Tokyo was draining when I was about to leave, but when I got to Shimane, I saw that everyone was living life as usual, so I was impressed by the differences between the two areas. My last live performance was at Kakinoki village in Shimane, it’s located deep in the mountains, even for the standards of Shimane. Some of the people there live self-sufficiently or work two jobs, and I’ve noticed that a lot of the people that I meet in these remote places around the country had relocated because they didn’t like how under certain circumstances, the city can get restless. In that way, they’re really ahead of time. They don’t watch TV or the news, it seems like they enjoy it. This notion particular to the old countryside life, that someone from outside would let them know if they’re in actual danger, is very much alive there. I guess that’s how things are when you’re there.

Information overload can make you worry about the things you normally wouldn’t think about. People talk. Being in the countryside has taught me that there is a lot of information you can live without. For some time, I only turned on the radio when necessary, and I didn’t even use the internet or watch TV. When you are swallowed by too much information, it becomes impossible to imagine what’s ahead. For example, the reality is a lot of people are dying everyday but the exact number of deaths and other dark stuff like that, is only reported by the news during times like this.

Many people are really worried about me because of the way I work. However, I was already prepared around 20 years ago. When I started traveling, I decided that I would keep going no matter what happens. I feel like I’ve found a reason to stop and finally take a break. Now, for the first time in over a decade, I’m taking a break.

– In this current situation, and after this crisis settles down a little, is there anything that you’re planning to try?

Up till now, I’ve been traveling a lot, so regardless of the corona situation, my plan for this year was to dedicate my time to producing. It was already planned. Now that everyone has moved to streaming their live performances, it has gotten to the point where it’s just way too much. Since they can perform any time they want, they’re overdoing it. I understand their intentions, but I think it decreases the original value of their work. The act of singing for someone would cease to function as a business. If it becomes that things can simply be streamed for free, it will, on the contrary, be necessary to rediscover the value of live performances once again. Although I am not completely against the transition to streaming, I would like to pull away from it and be different. The organizers of venues and live events are certainly frightened. With this, I think the new trend will become that if something isn’t necessary, it won’t happen. Misinformation is also scary. So, In my case, I would have to push myself to places and make people think, ‘We have no choice but to welcome him.’ It’s kind of like making yourself the villain. Well, that’s just an example, and when nothing more can be done, I might end up being a soba craftsman.

Things like this will definitely happen a few more times. The most pleasing part of freelancing is that it requires flexibility in how you row your boat and manage your pacing. At the same time, you’re responsible for everything you do and that’s the tough part. But you can’t survive if you can’t find joy in it too. I also think it’s important to know where music stands in your life. If you try to make your life revolve around it forever, a lot of people will kill themselves. Especially nowadays, I feel that it’s hard to continue music forever if you don’t know how to balance things out well.

I’m completely fine though. The fact that I’m not anxious is kind of making me nervous. Perhaps I’m a little relieved. For people that have been working hard without looking back, this is a chance to reflect, and the same can be said for the receiving end too. 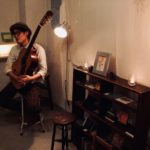 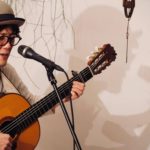 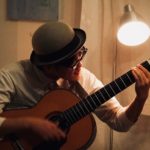 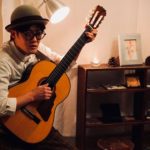 After I finished the interview and was editing this article, I realized that I forgot to ask him something important. I didn’t quite ask about his new work ‘ett‘, which was released on April 22nd. Moreover, this album will be the first in which he performs solo. Come to think of it now, there were a few more things that I wanted to ask. With this timing, he has relocated his base to his hometown, Fukuyama, and has released music tying back to his original roots. I hope that his songs will soon echo within intimate places throughout the country once again. 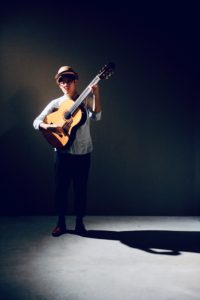 Eiichiro Taruki is an artist from Fukuyama, Hiroshima. His guitar performance style, creative and artistic, has taken him to various places around the country such as cafes, shops, traditional houses, hair salons, and bookstores. Taruki has also had cross-industry collaborations with creators including illustrators and designers.

He is engaged in a wide range of music production, providing music for games, commercials, radio shows, films, and shops. In March 2015, at Tokyo’s Ryogoku Kokugikan, he participated in TOKYO GUITAR JAMBOREE as a secret guest. He performed alongside musicians such as Tortoise Matsumoto from Ulfuls, Koji2 Tamaki, Tamio Okuda, and Shigeru Kishida from Quruli, as the event’s only freelance musician.

In 2016, Taruki completed a total of over 300 live performances. He also enthusiastically interacts with musicians from overseas including Denmark, Sweden, Basque Country, Thailand, South Korea, China, Scotland, and Argentina.