COVID-19. How did we conduct ourselves in response to the coronavirus, an invisible otherness, that abruptly appeared before our eyes? In listening to the words of various artists, I’ve witnessed moments where the essence of their lives’ joy come to surface. How are the two from moogabooga, who make a living by breathing life into objects in their animation, currently living and creating? I became very intrigued by this idea, and decided to visit them in Tokyo, their new base that they moved to from Kyoto in the midst of this pandemic.

We wanted to express how the same wind can pass through different places if the windows are open.

– Looking back at April when the state of emergency was announced, what was the situation like? 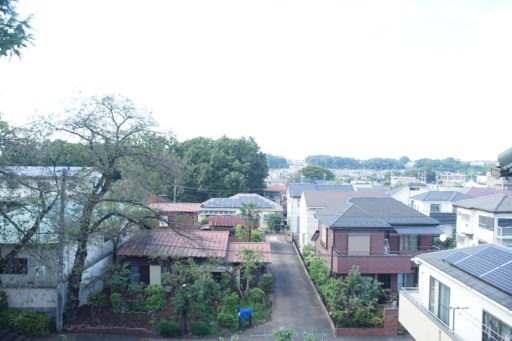 Makoto: Before the state of emergency was declared, we had already decided we’d move after Golden Week in May. Until then, I was posted in Tokyo in March and April, so the plan was to pack and prepare for the move by going back to Kyoto sometimes. But we ended up moving without me ever returning because the pandemic disallowed me from leaving Tokyo.

Ayako: Our child had nursery for the whole of March, but April mostly consisted of preparations for moving. We planned and went through the procedures so that he could start in his new nursery by May, but we had to home-rear because of the coronavirus. We ended up unable to take him to the nursery at all in April and May. But because of the moving, we had already planned to home-rear him in April regardless of the pandemic, so relatively speaking, we weren’t really swung around by the pandemic.

Makoto: As our child hadn’t gone to the nursery since moving here, we were planning on starting production from May, but we had the deadline extended for a month. You can’t create things with a child around, even if there are two people involved. We just had fun for the whole of May because we hadn’t seen each other in two months.

Makoto: There wasn’t much change even after I moved here since my job doesn’t require going out, and I’ve always shut myself indoors while working.

Ayako: Kyoto’s more of what you’d call a metropolis, and I think the atmosphere there was somewhat tense. It’s more relaxed here.

Makoto: Few of my jobs as an animator were called off because of the pandemic, but I feel that we were pretty unbothered by it. When we lived in Kyoto, I’d often shoot here in Tokyo even if it’s for a day or two, and I’ve also been posted here. With the risks that come with transport in mind, I think it would’ve been difficult to do these things if we were living in Kyoto right now. I feel that there are many jobs open to me now that we live in Tokyo.

– What is the situation like for the animation industry? 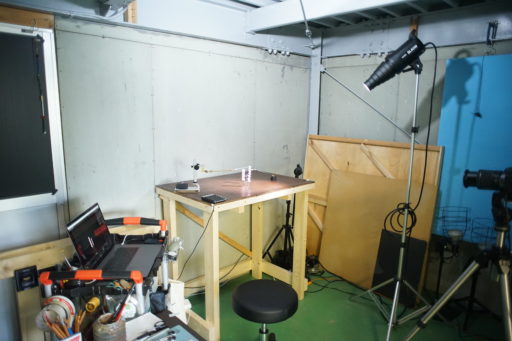 Makoto: More people started posting stop motion clips with their dolls and such on social media during the period of self-quarantine. I have more opportunities to watch stop motion animation now because of this. Along with this, I feel like we’re getting more animation jobs now.

Ayako: It seems like the demand for the animation industry has always come in waves, and maybe it’s just that the wave’s coincidentally here again, but even if that’s so, I really do see more stop motion animation now. Maybe everyone has so much time on their hands from spending it at home. There’s now an app for stop motion animation, and it’s become easy to do. That’s why people are more willing to give it a try.

Today’s shooting and editing environment is very different from when we started animation. The transition that’ happening right now is as great as the one from film to digital. There’s even software for animating now, so it’s possible to check every frame as you create, whereas in the past, you had to film a scene up to a certain length to check the movements.

Makoto: That’s why anyone can make stop motion, and it can be somewhat touching to be able to see something you’ve created move. This climate made me think more about how to make the dolls look more alive. It’s made me think unnecessarily deeply about the quality of the acting and movement.

The majority of projects that I partake in as an animator are seen by many people. Careful movements and proper acting are expected in these things. The best kind of stop motion animation won’t make you be conscious of the fact that the clip was filmed frame by frame, and will properly deliver its story to the audience…On the other hand, what we do is incorporate a sense of discomfort that doesn’t exist in reality in our works — the type of discomfort that makes the audience conscious of the frame by frame filming — as if to pull them into the animation’s universe by force. That’s the hardest part of animating. You do it carefully, they move neatly. You can achieve that if you get used to it. I’m stunned by clumsy stop motion movements similar to the way one would be stunned by a child’s drawing.

Ayako: Depending on the person creating them, the movements can be completely different. I think we like clumsy movements. It’s kind of magical, like it brings magic to life.

Makoto: Magic sounds too clean. Sorcery is more like it.

– During this pandemic, did you start anything new?

Makoto: We worked on projects for NHK and such, but we weren’t able to do any independent work. Since we have some time now, we’ve started working on independent projects.

Ayako: We’ve had our independent work in mind for a very long time. We were able to make time to structure and discuss it.

Makoto: We’ve finished moving, and we have the environment to create in peace now. I haven’t been able to create, but “MONODARAKE -Things Everywhere (*1)” embodied themes that are essential to moogabooga. Rather than in conventional character animation, there’s meaning in moving objects. It’s sort of like breathing life into them. What we’re trying to do in our independent work right now is an extension of these things, but it might’ve changed a little because of the pandemic.

Our original project originally drew inspiration from nōgaku, and was supposed to have one character stand on a stage to do something, but we changed that, and now, besides the stage, we also have sheds for every character. I think the idea of sheds derives from how people couldn’t leave their homes during the time of self-quarantine, and were unable to meet each other outside.

Ayako: We wanted to express how the same wind can pass through different places if the windows are open.

(*2) When we did the exhibition for Kenoni, we — Makoto, our son, and I — spent the night in the exhibition room, and although I didn’t know where it was going to exit from, the window was open and the wind was blowing in very nicely. We were sleeping with all the artwork, and there was good air blowing in. The exhibition was titled “Kaikou (Encounters,)” and it was inspired by the idea of discovering something by chance upon traveling. Feeling as if something was being moved by the wind, I made a wish, and it came true. This image stuck with me. 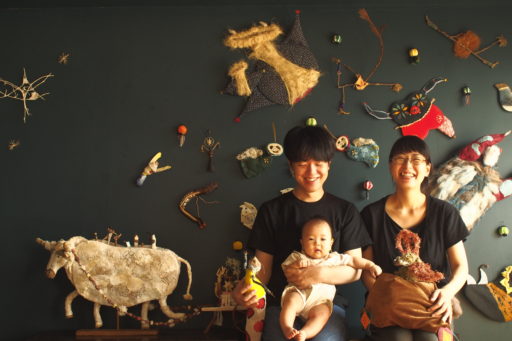 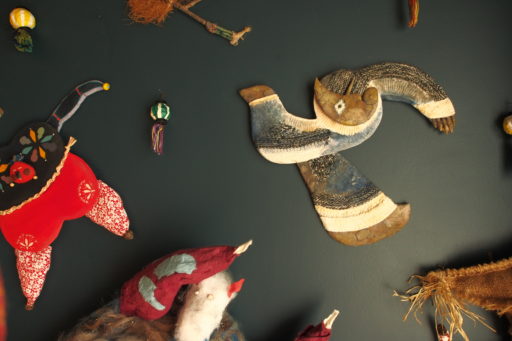 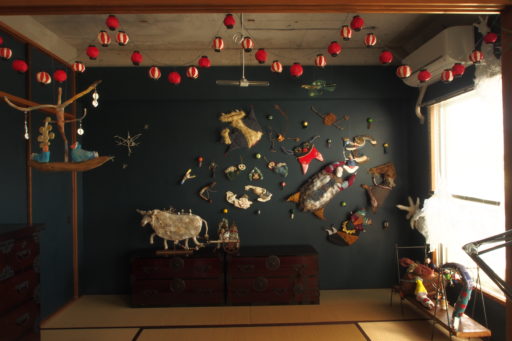 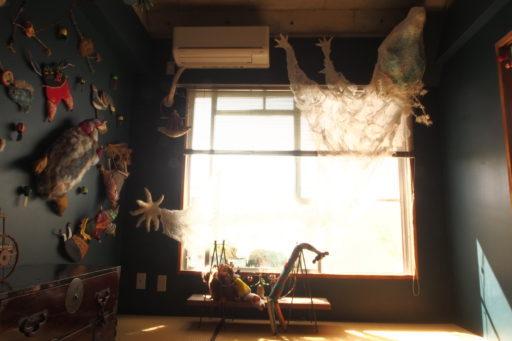 Makoto: I don’t understand things like God because they’re vague. The things that I create with my own hands are more definite than the prayers given to God, and it makes more sense to me to pray to my creations rather than God.

The dolls that we make and move are primarily nonexistent. Cups aren’t living things, and neither are dolls. Only in clips do they look like they’re moving and living. That means that I become God-like in the universes within the clips. Yet, that’s not how I feel at all. When I think of how I’m giving life to objects, I feel lost in what I’m doing. The objects that start to move in the clips are objects that I give life to and move around, but it’s the objects that are God-like here, instead of myself. That’s why I, if anything, have respect for the objects that I create.

I’ve started an independent project on my own as well — I’m thinking of creating a series of stop motion clips that capture the process of creating dolls, from giving life by moving them, and then destroying them with scraps of materials lying in the studio. This idea came to mind because the dolls that are made for animation, have this look after filming that I’m uncomfortable with. They become these unwanted objects after filming is done, and I’d been thinking about what to do with them. I wanted to act with responsibility from creating, moving, and destroying them.

The same thing could be said for the independent project we’re doing together too, but I think this all means that the things we’ve accumulated little by little are starting to bloom now. 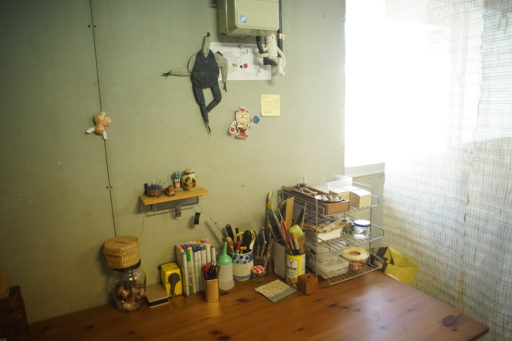 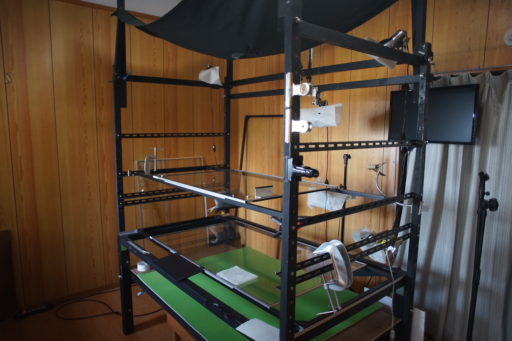 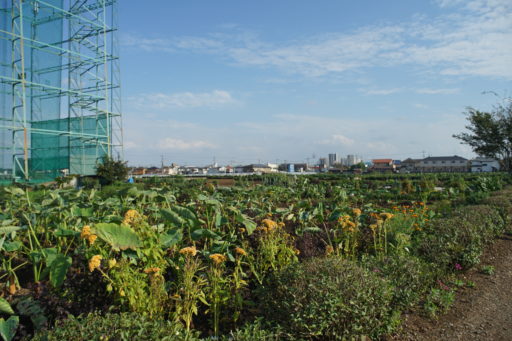 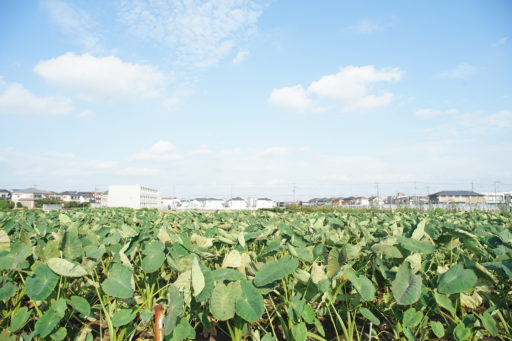 moogabooga’s studio and a walking path (at Kiyose city)

*1 A short animation series ongoing from 2014 airing in NHK Educational TV under the program Petit Petit Anime
*2 An exhibition by artist unit ‘Kenoni’, an artist duo consisting of Ayako Takano and Min Sakamoto. The exhibition was held in 2017 in the gallery room of Tsukiyo to Syonen

I was interviewing in a settlement at a valley in Yamanashi until the day before I headed to Kiyose, moogabooga’s base, from my accommodation in Yokohama. The train ride, which was approximately an hour and a half, felt extremely long. Since Kiyose is located at the border of Saitama and Tokyo, it’s at the very edge of Tokyo, but even then, I felt the capital’s expansiveness. Finished with the interview, I was walking in a neighborhood when a dense grove suddenly appeared in front of me with a wide field spread over the other side. And what I also saw there was an unattended vegetable stand. I was surprised to find out that a place like this exists in Tokyo. And then I thought how it looks like good air will pass through this place. 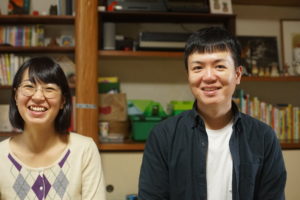 moogabooga: An animation duo consisting of Makoto Takano and Ayako Takano. Creating animation under the theme ‘imagination in everyday life,’ the duo specializes in crafts-like and lo-fi production methods that originate from manual procedures. From directing to doll making, animation filming, and editing, the duo covers wide ranging creative activities related to animation.