Miraiken’s new interview series, ‘I’m here…‘ started during the unexpected coronavirus pandemic. Since April, we have interviewed five musicians online. The very hot summer has passed, and now, the days spent at home due to the state of emergency can feel like a dream. I felt a strong urge to visit artists and directly hear them talk. Artist, Motoshi Tsuda. At his studio in Kobe, I asked him what he had been thinking about, and what he had been painting.

It’s like we just had to be there together forever to embrace the passage of time from morning to evening. And the city was quiet. While the world wasn’t moving, I was able to see things differently, such as the things that were unseen to me until then, like the flow of time — I enjoyed having that kind of time.

– What was your life like during this year’s coronavirus crisis? 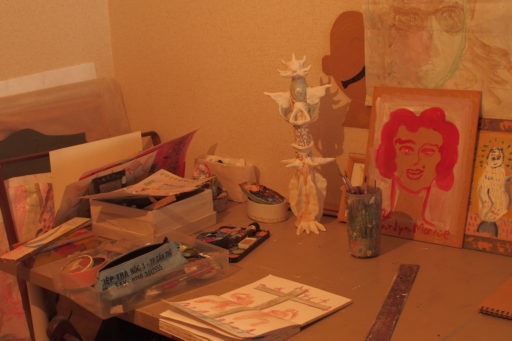 An exhibition in Tokyo’s Kichijoji that was supposed to be in June was postponed. There were people that I wanted to meet, people that I wanted to show my work to, and I was shocked by how I could no longer do all the things I should’ve been able to do. Back in January, I held an exhibition in Osaka. We didn’t know much about the coronavirus back then, and I exhibited relatively fun paintings under the title ‘Cheerful Stories of My Tomorrow-Self.‘ But after that, the world drastically started to turn gloomy. Every time I watched the news, it felt as if my head was imploding.

You see, I usually work at a department store. Nearly half of the shops at the lower ground floor were closed. The department store itself was open, and I assume that they had various reasons like protecting their employees, but half of the shops were closed. The place was only sparsely populated by customers, it felt like a ghost town. When this came to an end and the people came back, I thought about how delightful it is to simply have others around.

Until now, I didn’t really have long-term breaks because I had been working. This year, though, the department store was closed during Golden Week due to the coronavirus. Given that, Miwa(*1) and I didn’t go outside, and were at home with only each other for five days. I could no longer do things that I normally did, like eat at a Chinese restaurant, go to a cafe after, then the library, and then stroll around. It’s like we just had to be there together forever to embrace the time pass from morning to evening. And the city was quiet. While the world wasn’t moving, I was able to see things differently, such as the things that were unseen to me until then, like the flow of time — I enjoyed having that kind of time.

– Did you draw anything during the time you couldn’t really leave the house? 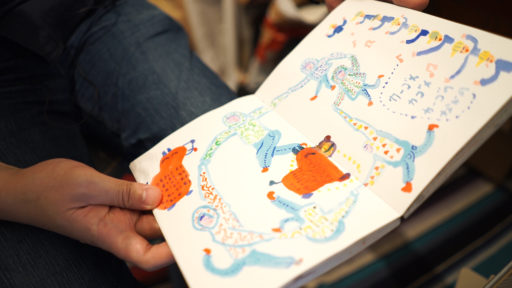 I couldn’t do anything so big or intricate. I made them as simply funny, exciting, and cute as they could be. I kept painting things that would make people feel blessed the moment they see them. I painted fun stuff without spending too much time. I finally have ideas on the kind of things I want to draw, and I’ve started to feel that I need to start preparing for big workpieces. I’m planning on doing an exhibition in March in Kyoto, so for this year, I want to focus on creating, and then output next year.

– After your exhibition was postponed due to the coronavirus, were there any changes in your state of mind?

We’ve reached our forties and we’re at the turning point of our lives. I used to think that holding an exhibition was nothing out of the ordinary for me, but I want to be able to present something good when I’m given the chance, and this feeling is now stronger than ever. But it’s not like the things that I create have changed because of the coronavirus, or that it broke my core — there are no changes in my approach to creation. Yet, it did make me realize how external factors can take away opportunities for me to present my work.

– What are your thoughts on the changes that will be made to galleries, exhibitions and the art scene from now on? 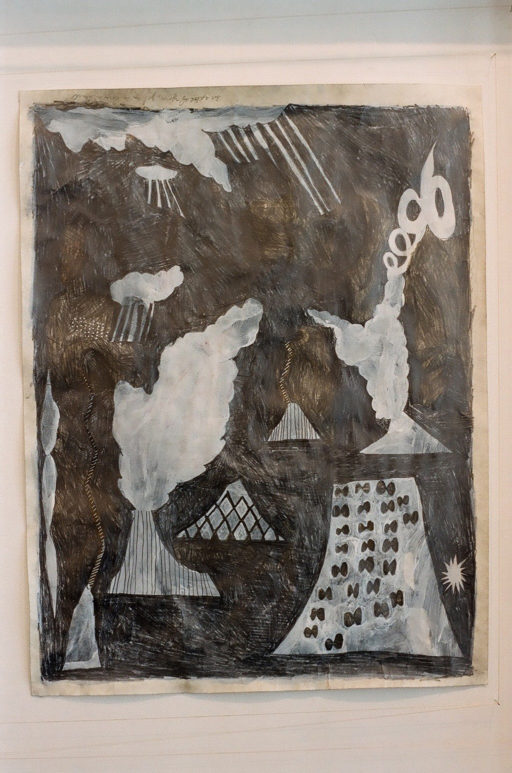 I think the act of creating and money are in separate dimensions. In terms of earning money, not being able to go to an exhibition or having a place to present your work can be something very crucial. If that’s the case, there are many things that could be done, such as holding an online exhibition. But I’m not in a position where I put food on the table everyday in return for my paintings. I paint because that’s what I need for myself. So with painting, not much has changed for me. You see, there’s no time period in which art isn’t needed. Right now, you can’t look at art, and there may be no space to do so as well. But that doesn’t mean people don’t long for it. Those who create art will always create, and there are people who lean on it for emotional support. That’s why I’m creating quietly as of now.

This is my personal opinion, but I’m not so drawn to the idea of visiting exhibitions online. I went to an exhibition the other day with Miwa, and there are so many things that come with actually being in the venue — the impact of having an object in front of you, the intimacy, the thrilling feeling on the way there. These are some of the things we look forward to. This is especially because Kobe’s fireworks festival just got cancelled. I’ve recently been painting things that have a lot of people and are lively. It’s fun painting these things because the people look tiny and restless. It’d be nice if I could turn words like ‘social distancing’ and ‘Three Cs’ into jokes through painting. You sharpen pencils, prepare paper and create only with substances. I’d like to have people see the things I’ve rustled up with their own eyes, and I want to talk about Ghosn too (*2). I want to be there to tell people to buy my paintings only if they still like them after listening to me speak my thoughts out.

The other day, when I was watching TV, someone was saying something like ‘Artworks imitate the future,’ and I thought that’s right. They have the functions to connect outside the conventional way of connection, and they’re painted duplicates of the future. Whether it be art, music, or theatre, there’s no fun in exposing mere projections of the future, there has to be a little bit of magic there. Maybe some kind of astounding way of connecting. Like a way for things to synchronize. I think people are surprised and touched by works that have these things. I believe that people can’t be so moved by paintings that are only good, or techniques that are only incredible.

A long time ago, I think I was in my twenties, I was on the Chuo line around Odawara, reading this book that had this story about some seashore called Oiso, and when I looked up from the book for an instant, I noticed that I was in Oiso. This doesn’t profit anyone, and I don’t know why but I found this funny. For me, this is something that I will always remember. I think that’s what it’s all about.

I think on the surface, my actions might change. For example I could be buying paint online because Yuzawaya is closed. Art supplies may change after some time too. 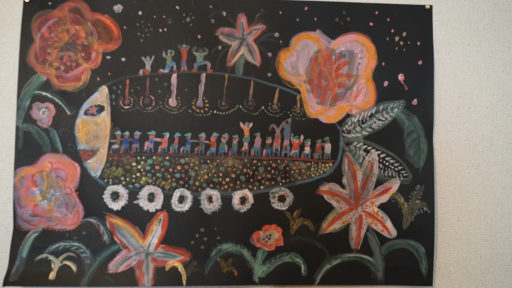 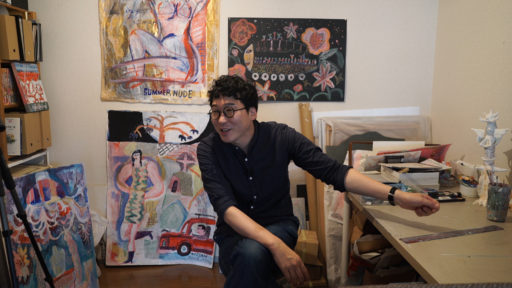 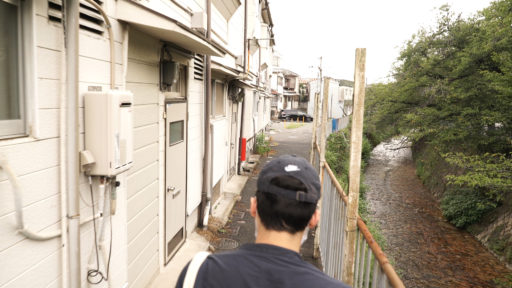 *1 Miwa Oyanagi, his partner who he often collaborates with in exhibitions.
*2 Refers to his work, which was inspired by the pun ‘NISSAN’S GHOSN IS GONE.’

After the interview, we walked around the city of Kobe together. Walking by the small river that flows through the bottom of Mount Rokkō from the back of the apartment where the studio is, what I saw there was a side of Kobe completely unknown to me. People tend to assume that the landscape they see at the moment is all there is to the world, and that what they know is the whole world. With just a little bit of imagination, one will know right away that this is untrue. The world prior to the coronavirus, and the world after the coronavirus. Has the world really changed its form suddenly? I walked past a narrow alley, remembering the drawings that he shyly showed me from his small sketchbook. 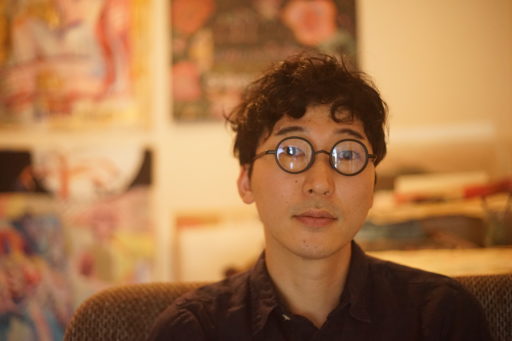 Born in Kanagawa in 1978, Tsuda is a graduate of Tokyo University of Agriculture. He started painting regularly in his late 20s. His works are known for their atmosphere reminiscent of mythologies from foreign countries, which are captured through the various lines, shapes, and colors that are unconsciously brought to life from their brush strokes. Tsuda has presented his works in many solo and group exhibitions.