Saito Camel, ever since his days in the band WATER WATER CAMEL, it’s been my pleasure to have him perform and sing many songs at my events. As an artist who absorbs the little joys and sorrows of everyday life, what could he be feeling? How does he gaze at the world? What kind of future does he envision? I found myself wanting to ask him these things.

My economic activities are stagnating, but if that’s the case, I could be regaining something too.

– Tell me about the situation around the Fukuoka area during this time (April 17th, 2020 at the time of recording)


It’s sort of becoming an awkward situation. Essentially, we’re being told not to take our children to nurseries and after-school day-care because it’s high risk. At TOMMY BEEF, I’ve had the work days reduced, and I’m trying to stay home half of the week. When I’m home, I home-nurse the kids like they’re being home-schooled. They study from 9am to around 3pm because I’m trying to make them spend time the same way as it would be in school. My wife is working under reduced work hours, and she’s allowed to work from home on Saturdays.

My live performances are pretty much cancelled. I’m doing production work at the same pace as always. Now, I’m starting to do a bit of preparation for online live performances. Actually, last December, the three of us gathered at Gusto late at night and we talked over parfait and french fries. In that moment, although it can’t be anytime soon, we all felt like we should definitely meet up again. To follow up on that, maybe we can do something online now. Well, rather than restarting activities as a band online, it would be for fun.

Even before all of this, there was great potential in doing music online, but I didn’t feel the urge. Anyhow, I’ve recently started to find it a bit interesting. I might be at that stage myself. Things are slowly coming to order at TOMMY BEEF, and this time, I’m arranging my own shop, but I still have time to pour energy into the things I want to do. Maybe these things have a lot to do with it too.

Because of the coronavirus, the amount of time that I’m home has increased, and when that’s the case, you feel the urge to do something. It could be that the things I’ve wanted to do in the corner of my mind have become more prioritized, and are higher up on my To Do List. Personally, in making songs, my pace hasn’t changed. For a while, I didn’t have the space to have someone join in, but, in this situation, I might be able to start doing that sort of stuff.

Water Water Camel, in the first place, was a band that friends in the neighborhood had to play around, so it’s not really something so excessive. Although I still do music on my own, I’ve started to distance myself from commercial activities and I’m in the process of regaining a sense of playfulness in my music. I think for musicians, there’s producing and performing live (business), and right now, these things don’t feel right to me. You know, I’m satisfied with creating when I want to create, making people listen when I want to, and then just having them play the guitar to it. As of now, my purpose isn’t to create works. I want to be driven to songwriting, just think about where I want Gen to play the guitar, and where I want Sudo to play the bass.

My economic activities are stagnating, but if that’s the case, I could be regaining something too. This is such a common topic, but what do we want from our economic activities in the first place? Well, this is the situation that I wanted. As living things, I feel like we’re healthy, especially looking at my kids. They look fulfilled. Even so, it is still troubling and tough.

– Talking about this subject made me curious about topics such as financial aid, and basic income, for which something seems to be in the works regarding it.

From the humanistic aspect, I feel like this is good, yet, on the contrary, I somewhat fear the fact that we will be too detached from situations which require our survival instincts. I think a situation in which I can be overprotected by society is something that I fear. I think I’d like to stay independent despite the risks. When you take action, there’s always a reaction to it. You can’t see it, and everybody is unconscious of it, so we can all chase after what’s visible and stands out, but there’s always some sort of shadow there. I’m scared that one day, the shadow will do things that can’t be taken back.

– In this current situation, and after this crisis settles down a little, is there anything that you’re planning to try?

Fundamentally, I’d like to always forward my steps in life as planned. It’s not the kind of plan that’s like, I’ll do this because this is what’s happening in the world. Rather than that, I’m planning with consideration to my family. My kids are getting bigger, my younger one will enter elementary school next year. I need to start my own shop here by then. In that sense, no matter what’s happening in the world, I am fully stocked with the things I have to do. But because of the coronavirus, I’ll be taking off last minute. I think I’ve become a little more positive about my songs and streaming small live performances online. I’m basically lacking in curiosity, so I don’t really do new things. Until now, I didn’t do many things because of my lack of time and interest. However, the coronavirus has put everyone in a situation in which we have to be home, and now, I’m starting to feel like I can do some things. But, if I am to do something, I want to do it more in-depth than just doing it with that feeling. I don’t want to start off sloppy. That will follow you around, so I’d like to be driven to doing things. 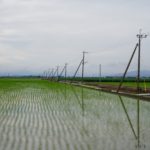 We have been living our irreplaceable and precious lives, every minute, every second, before the coronavirus, even now, and will continue to do so forever. Our ordinary lives can make us forget about how death is not on the other side of the living’s borderline, but is tightly attached right next to our lives like shadows, even now. Listening to him perform makes me contemplate these things. Seeing my son, almost 3 years old, living the present, crying and laughing his heart out, I feel so much love for this ordinary life, and it has made me want to visit Fukuoka with everyone again. 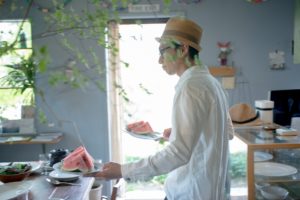 Camel Saito is an artist from Yamanashi, born in 1980. He took off as a vocalist and songwriter in 1995 with his band WATER WATER CAMEL. In 2009, he opened South Patagonia Cafe. Since 2016, he has relocated to Fukuoka. In 2018, Saito released “by the sea, in the woods“, an album including a letter and small recipes. In the same year, he opened “TOMMY BEEF“, a butcher shop and cafe in Saga as its coordinator and chef.