It’s been roughly a year since I’ve started this interview series. Meanwhile, the situation continues to be quite unsettling—the state of emergency had been announced and lifted, only for it to be re-announced in April 2021. This interview with Mr.Tamaki Ono was recorded in October 2020, but due to moving, and relocating my base, it took me over half a year to publish it.

On a very hot day for October, after a typhoon had passed, I listened to Mr.Ono talk in his studio at the University he works at. Together, we walked through a narrow alley that weaved down the slopes of Onomichi.

I devoted much of my time to interobjective work, where I would face and paint objects, rather than interpersonal work. Life was really simple. I enjoyed the time I had, it was unexpectedly fun and fulfilling in a uniquely isolating way.

– The state of emergency was first declared in April 2020. How were things like around that time? 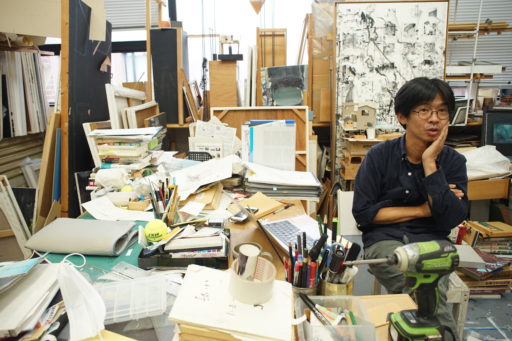 I remember being busy as I work at a university on top of being an artist. I used to teach technical painting courses in person, but it was decided in early April that everything would be done remotely. So all the students had to paint at home, isolated from one another.

I had this bad feeling that I might not be able to enter the university campus, so I decided to take supplies and some simple things home. I wanted to make sure I’d still be able to do something even when I’m stuck inside. I’d usually do everything in my university studio, but I made space in a corner of my house and really confined myself there. I didn’t leave the house at all during Golden Week, I just focused on creating.

I’m usually engaged in various projects, meeting artists, and even working for the university. I’m always on the move. But back then, I devoted much of my time to interobjective work, where I would face and paint objects, rather than interpersonal work. Life was really simple. I enjoyed the time I had, it was unexpectedly fun and fulfilling in a uniquely isolating way. It was a secluded life—simplified with the conventional interactions and scaffolds of society removed. As humans, even when we’re told that we don’t need to do anything, we find ourselves things to do, and I thought that being in that kind of state wasn’t so bad at all. There will be problems with the economy, but in terms of my mental health, I found it livable.

Painting is about the object’s presence, how you observe and explore it, and how you shape it into something satisfying by controlling the supplies around you. I was glad to be able to focus on these nuanced, delicate tasks. I might’ve felt this way especially because it contrasted what I did before.

– In that environment where you were fully focused on painting, what was going through your mind? 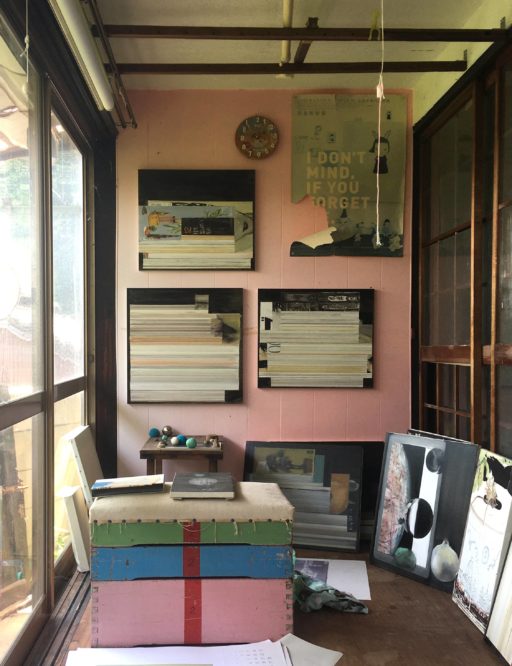 I don’t usually spend 10 hours a day painting. It was a miracle that I could find time to face it like that— before this, I’d paint using an instantaneous force within the segmented time I had.This led me to reflect on whether during the painting process, I’ve ever had the time to sip a cup of tea and look at my own work. I felt like I hadn’t had that kind of time in a long while. There were times in high school when the couple of hours I spent painting would feel long, like it was the only thing I was doing. I thought this was kind of similar to that sensation.

After that, creation in itself becomes tarnished by external factors. For me, it meant the creative platform revolved around presentations, critique, and taking action in a project-oriented matter. Under circumstances where the surroundings don’t matter, for example, when a highschooler paints, society and other things become irrelevant. For them, what comes first is to just do something, and they’d do that right away. It made me think of how painting can be done within your personal boundaries. When you think of starting projects and installations, you need to be conscious of the exhibition space, and envision the installation from start to finish—it requires you to calculate backwards. But with painting, that’s not really necessary because you can get started as long as you have a board and some supplies by your side. I appreciated the simplicity of it.

– My environment was quite stressful as I had to look after my child while working from home, but it seems like you had a relatively fulfilling time.

I’ve also experienced some constraints. When I was in university, I got into an accident while climbing a mountain and fractured my bones. I broke my limbs and I think I was hospitalized for a little over a month. What I did during that time was draw on a small memo pad with my nondominant left hand. Those doodles became a habit and something about it felt so real.

I went through a lot of training in art cram school. There, I painted very intensively until I entered university. But once in university, the momentum just drops. This is because there aren’t any external factors motivating you to keep painting. It’s what led me to do something reckless like mountain climbing, but those clumsy doodles from the hospital made drawing feel real once again.

– Do you have any plans for the future? 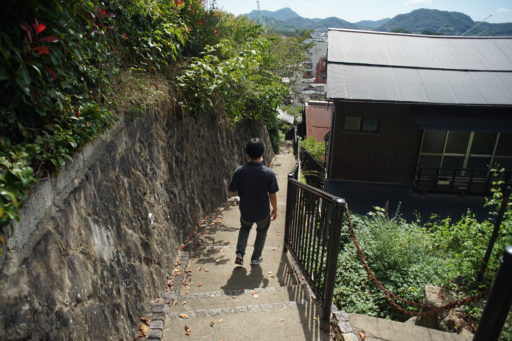 I’m interested in the research and oral surveys done in places like Onomichi’s Yoshiwa. Their subjects are people that are past their 80s or close to 90, and I think there isn’t so much time left. One thing about Yoshiwa that shook me is how my friend’s grandmother, who is a fisher,doesn’t know how to write. Because people like her live in nonliterate cultures, nobody is there to document their lives and share it. Everything stays in their heads, played in their minds as stories, and released through sound. We can read, write, and have common sense, but it only comes naturally because we’ve gone through compulsory education. We shouldn’t be thinking of that as the norm. When I met the fisher grandpas and grandmas of Yoshiwa, and the indigenous people of Malaysia, I realized how the places we are at in our lives are nothing close to being the ‘norm.’ There are lives that are independent from modernization that have continued on for tens and thousands of years, and I’m interested to see if self reflection can lead us to learn from them.

What I want to say here is that when a place of cultural anthropological value changes, we should keep in mind how their culture is different from ours, and reflect from a historical standpoint by thinking of the things that existed there in the past, and how we can make ourselves a part of them.

There’s this person that I really like named Norihito Nakatani, who’s a proponent of a field called sci-fi architecture history. He’s edited for publications like ‘10+1’ in the past, and in one of his statements, he said that ‘the past is here.’ The past isn’t something that ‘once was’— it’s certainly here right now. The past didn’t use to exist, but rather exists in the present time. I find this to be an interesting way to perceive history.

When you see a white canvas, you’d think that you’d be able to freely paint on it, but humans actually aren’t that free. Our minds are highly aware of the many fields there are to art history, and first of all, although I don’t know where in Italy canvases were developed, or where the material was invented, the practice of sticking canvas on wooden frames is in itself, the result of a certain chain of events. We accept canvases as things that exist right now, but just like this, they’re totally related to how Venetian painters started practicing oil painting on them. Things can look different to you depending on whether or not you’re conscious of it.

I’ve been reading some fragments of a book translated by Mr.Nakatani titled The Shape of Time, and it goes over the concept of chain reactions. Instead of perceiving art history as an accumulation of movements built by individual charismatic artists, the book perceives it as something closer to cultural history that has been inherited by and for a group of people. It’s a very fun read because of how the book’s take on art history separates itself from the talent or uniqueness that the artists had. Michaelangelo and DaVinci during the Renaissance, Jackson Pollock after the war, and Monet from the Impressionist movement have had their works be called ‘sensational’ and remembered in that sort of narrative. However, if they were in that kind of position during their movements, that means the atmosphere for it to happen had already been created. They only happened to be in front of the goal, and struck the ball into it by chance as it was being passed around in that atmosphere. Art history tends to go for a narrative which sees the goalscorer as the star artist. Though I’d like to see the unique moves of people in the background as well, and that’s something I’m interested in.

– Speaking in terms of background, there is currently talk from the Agency for Cultural Affairs about providing subsidies on a fairly large budget. Do you think this will impact anything?

As part of the New Deal during the Second World War, Roosevelt commissioned public works to the kind of artists that were poor and lived in Greenwich Village (*). He gave them money and made them create many murals. The ones that survived on that were Pollock, Rothko, and other abstract expressionists. The impact that these democratic American policies had on artists was big, so that’s how postwar American culture flourished. Perhaps the arts were strongly promoted partly because of their boost in national power, but public funding can impact art scenes as well. 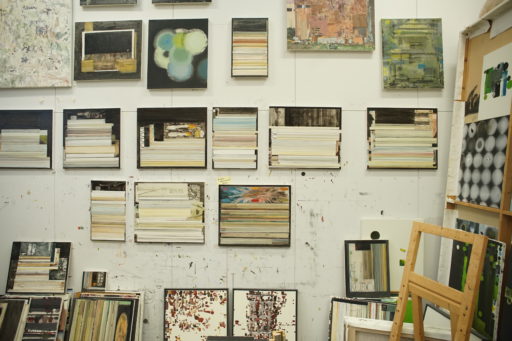 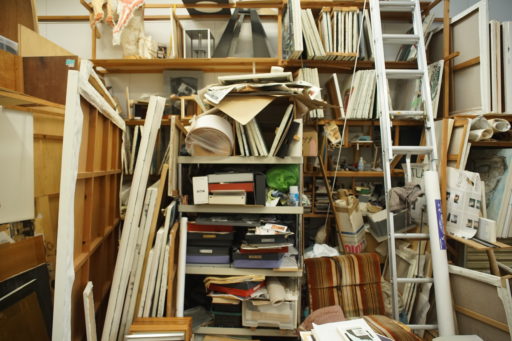 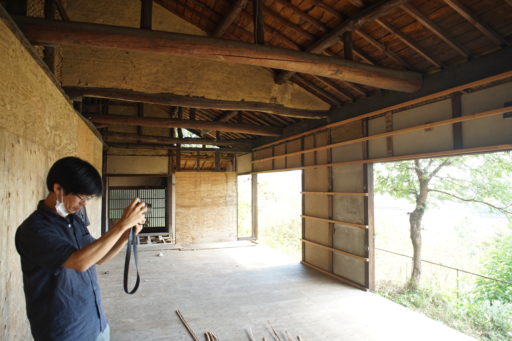 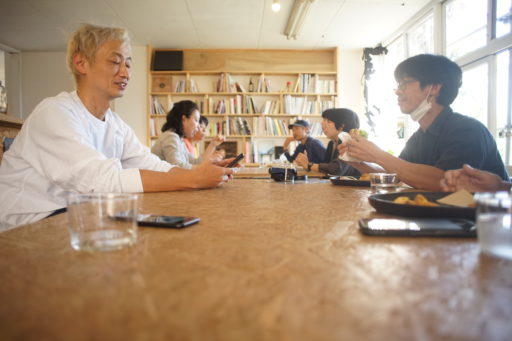 *The Federal Art Project was founded by the Works Progress Administration as part of the Second New Deal during the Great Depression. It was proposed as a key policy in providing aid to the unemployed.

Standing on the sloping land of Onomichi and looking at the townscape spread in front of me, I feel myself standing on top of the past. The painting of a cross section of stacked books by Mr.Ono that I saw in his studio, and the narrow alley that endlessly weaves through the houses on the slopes, seemed to be very exemplary of this world and how time is layered on top of itself. When I stand here in front of this townscape once again, a few years from now, what will I see? What kind of impact would the coronavirus, the world’s most sensational topic today, have on that view? 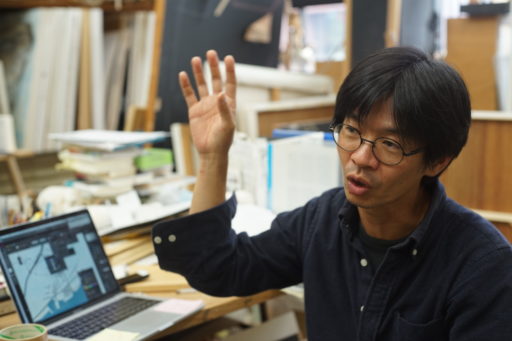 Artist. Born in 1973 in  Hokkaido. Graduated Tokyo University of the Arts, Graduate School of Fine Arts, Department of Oil Painting in 1998. Currently a professor at Onomichi University Department of Art and Design, and previously a part-time lecturer at Tokyo University of the Arts, Ono creates paintings and installations. His solo exhibitions include ‘Kitsune Sakusen (The Kitsune Strategy)’ at Ginza’s Futaba Gallery (2000), and ‘gardens, the Adventures of Flowerpots’ at Fukuyama’s Fukuyama Museum of Art (2008). Ono has also exhibited his works at VOCA exhibitions, Hiroshima Art Document tinab., International Prague Art Festival, and more. He is active in a duo named ‘Mō Hitori’ with artist Kiyohito Mikami. Based in Onomichi, Ono hosts workshops and exhibits his works. Since 2007, he has been the project manager of ‘AIRONOMICHI,’ an artist-in-residence in Onomichi’s Yamate District. He is the representative of AIRONOMICHI’s executive committee, and the vice representative of Onomichi Restoration Project for Unoccupied Houses, an NPO.